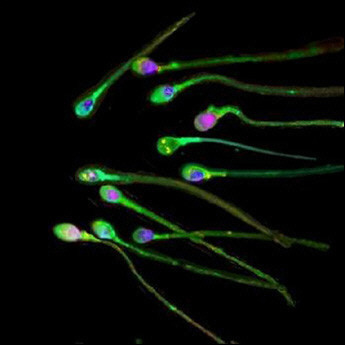 Home » Health » The secret life of sperm: may aid contraception and male fertility Scientists have discovered something about sperm that makes perfect sense: they don’t start swimming until they are closer to the egg.

Because sperm only have limited resources, they need to maximise their chances of fertilising the egg.

University of California researchers have found that sperm increases its internal pH — its acidity or alkalinity — due to pores on its surface that allow it to jettison protons.

Dr Yuriy Kirichok, who led the research, said: “The concentration of protons inside the sperm cell is 1,000 times higher than outside.

“If you just open a pore, protons will go outside – we identify the molecule that lets them out.”

A substance called anandamide, present in the female reproductive tract and in particularly high levels near the egg, seems to be the trigger for this release, which in turn allows the sperm’s tail to begin moving, and the vigorous swimming to begin.

This may also explain why men who regularly use cannabis/marijuana experience greater levels of infertility.

It seems fair that, as scientists learn more about sperm, it could aid in two ways.

Firstly, it could be used to create effective male contraceptives.

Secondly, it could be another explanation for male infertility. Sperm’s motility is already measured. Research such as this could help to improve motility, or to ensure that sperm doesn’t use up its resources too early.

Dr Allan Pacey, senior lecturer in andrology at the University of Sheffield, said: “Although it seems obvious that sperm have to swim in order to find and fertilise an egg inside the female body, or in the dish during IVF, we are only just uncovering some of the molecular details that the sperm use when swimming”

2 thoughts on “The secret life of sperm: may aid contraception and male fertility”