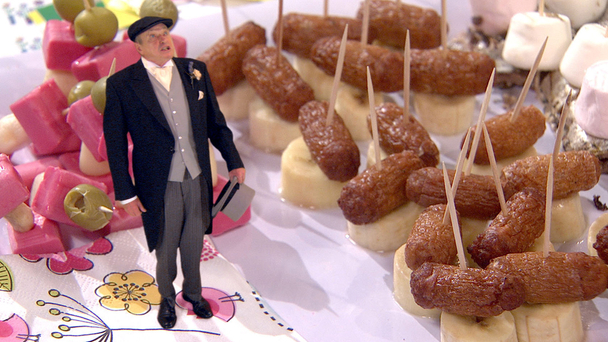 Home » TV » Grandpa In My Pocket returns to CBeebies

Grandpa In My Pocket with James Bolam

The BBC has announced a fourth series of the popular Grandpa In My Pocket will return to CBeebies.

The show stars James Bolam in the lead role, along with a number of star guests including Emilia Fox, Liza Goddard, Joanna David, Sam Kelly and Adjoa Andoh.

Grandson Jason is now a teenager, so it’s the turn of cousins Josh and Elsie to discover the secret of their Grandpa’s magic Shrinking Cap. The family has moved to a delightful windmill – The Mill on the Marsh – which they run as a small hotel. As various bizarre guests turn up, Grandpa has to shrink to save the day. He flies off in Josh’s toy helicopter or on Elsie’s Mrs Ostrich, creating chaos all over Sunnysands.

Fabulous animation and visual effects combine with hilarious live action to create a heart-warming show with adventure, songs and lots of laughter.

Exact broadcast times are still to be confirmed.

Who do you play in Grandpa In My Pocket?

I am Jason and Jemima’s Grandpa. We met them in the first three series. Now my other grandchildren, Josh and Elsie, come to stay for the summer and Jason lets them in on my secret life!

I’m just like any other Grandpa except I have a special cap that makes me very small and a bit magic, and takes me on exciting adventures. Josh and Elsie are amazed and thrilled to find out about my magic shrinking cap! They understand how it works and rescue me when I need it and manage to keep my secret all the time!

The heart of the show is that Grandpa/Grandchild relationship which is a very special one indeed.

Who are the new characters joining this series?

This series sees some new regular characters join the cast. I think Harvey is brilliant as Josh and Sezen is absolutely delightful as Elsie. They were both a little nervous at the start, but they soon settled in and licked all us adults into shape. They’re both so natural, and keen, so a real pleasure to work with. They really “live” the stories. It’s been a fantastic experience for them both working with such an experienced cast and they’ve learned a lot.

And Jason and Jemima are both still in this series too which gives the whole thing such great continuity. It was lovely to film with Jay (who plays Jason) again but I got a bit of a shock on the first day when this teenager walked in! I’d almost forgotten it’s been about three years since we filmed the last series. But we picked up where we’d left off really and that was grand. And Josie, who plays Jemima, has really blossomed too and gives a lovely performance.

And there are some great guest stars too, who should we look out for?

We’ve been very lucky to have some fantastic guest stars in this series – Sam Kelly, Liza Goddard, Adjoa Andoh, Joanna David, Emilia Fox, Neil McCaul – the list goes on. Not forgetting our wonderful regulars, Miss Smiley, Mr. Whoops, Mr. Mentor and of course the ghastly Aunt Loretta, all of them back and making me run about! The only problem is that I don’t get to work with the majority of them as Grandpa has usually “shrunk” by the time their characters appear!

What kind of things happen to Grandpa in this series?

He gets into all kinds of scrapes! He comes across a rabbit in a burrow, gets scared away by a mouse and he chases a spider! That’s the beauty of the shrinking cap, it takes Grandpa to places that no-one else can go! One of the most interesting moments was filming with a donkey. And Wulfy is back too. Never work with children or animals, they say, but do you know what? It can be fun!

What do you think makes Grandpa In My Pocket one of the most popular shows on CBeebies?

Grandpa In My Pocket is such a great idea – first class scripts, original and funny, the kids, and the parents, love it. I think the scripts really encourage the young CBeebies audience to use their imagination too. Also, we genuinely have such a good time when we’re filming which I think really comes across on screen.

How different is it playing a children’s character to other roles that you play in TV drama, theatre etc.?

It’s not really very different, though you have to be patient when working with young children in order to get the best performance out of them. We all still have to be real and true to the story just as in adult drama. It can be hard work, but it’s also very rewarding.

You have a young grandson – what does he think about you being on TV?

He enjoys watching Grandpa In My Pocket – he loved the stage show too! He told various people in the audience that “his grandpa was the Grandpa on the telly.” And it’s nice for him to watch it as things like New Tricks are on far too late for him and aren’t really suitable for him to watch.