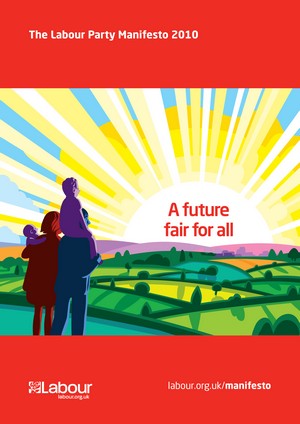 Home » Families » Election 2010: Labour Manifesto: What’s in it for families?

As Britain’s political parties start launching their manifestos, we take a top-line look at what it would mean for families, should that party gain overall control of Parliament and stick to their election pledges.

Gordon Brown unveiled The Labour Party Manifesto 2010. What does it mean for families?

Many financial initiatives that the Labour Party want to implement will have profound effects on individuals and the families they make up.

“Better Off Under Labour”

“A family with one child and one person working full time will have a minimum income of £310 a week in October 2010 27 per cent higher in real terms than in 1999. Tax credits will be increased not cut.”

There are also pledges about keeping Council Tax increases to a minimum and implementing schemes to assist with energy bills.

We know from the pre-Election Budget that Labour plans to scrap stamp duty on first-time buyer property purchases below £250,000.

Additionally, Home Buy Direct scheme will continue to enable working people to rent an affordable home at below market rates while they build up an equity stake.

In education and schooling, Labour pledges:

“Home School Agreements” will make clear the responsibilities of families and pupils, with every parent agreeing to adhere to the school’s behaviour rules, and real consequences if they fail the live up to them.

Labour pledges to invest further in schemes that reach out to children and families on low incomes, with special educational needs or disabilities, or those children in care.

There is a commitment to reducing the teenage pregnancy rate through higher quality, compulsory sex and relationship education.

Labour’s Manifesto has a whole section on ‘family life’. Here are the main points:

Under Labour’s premise that “strong families are the bedrock of our society”, and there is a pledge to financially support any loving, committed couple who brings up children.

The family justice system will be reformed in order to make it more child-focused and family-centred. “Parents who are clear their relationship has broken down and cannot be restored need more help to reach agreement about future arrangements early on in the process, for the benefit of their children.”

Parents will be able to share out maternity leave between themselves after a minimum of six months.

Naturally, many elements of governmental policies affect families both directly and indirectly. Here we have highlighted some of the major pledges. The full manifesto can be downloaded here.

One thought on “Election 2010: Labour Manifesto: What’s in it for families?”