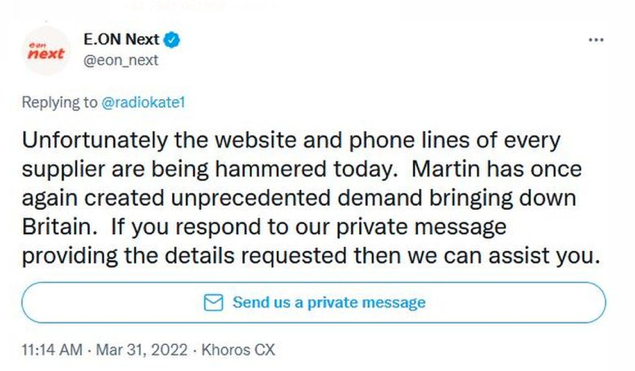 Home » News » E.On Next blames Martin Lewis for giving out same advice as them

One of the big six energy companies, E.On Next, has blamed their meter reading system crash on money expert Martin Lewis for advising energy consumers to take readings of their non-smart gas and electricity meters on 31st March 2022, despite them missing the same advice to their customers.

A now deleted tweet, which the BBC captured, stated “unfortunately the website and phone lines of every supplier are being hammered today. Martin has once again created unprecedented demand bringing down Britain. If you respond to our private message providing the details requested then we can assist you.”

So it seems that Mr Lewis is accused of “bringing down Britain” despite it being the companies, authorities and government who have ultimate control over how much of the price rise is passed on to consumers.

According to their recent Facebook post, “there was an ill-considered and off the cuff remark made by one of our Energy Specialists and in no way reflects our position. We have an excellent working relationship with Martin Lewis and his team, and we apologise for any offence caused. We ourselves have spent the past few weeks advising customers to submit accurate meter readings ahead of April 1st.”

Yet another large company treating the public, and financial experts, with complete contempt at time when there is a real and significant squeeze on personal finances.

It’s not the first time E.On Next has misjudged the temperature of public feeling. In January they backtracked on a campaign in which they posted socks to its customers.

They should’ve predicted the response would have been chillier than the feet of customers unable to adequately heat their homes. “If you have recently received a pair of socks in the post from us, we would like to say we are incredibly sorry for how we have made some people feel – this was in no way our intention.

Put simply, they should not have been sent out. The small mailing was originally part of an E.ON Next climate change campaign last year and in light of the seriousness of current challenges that many people are facing, should have been stopped.

We are embarrassed and incredibly sorry.”

Thing is, embarrassment and remorse doesn’t pay the bills.

Despite all the noises energy firms make about wanting to help customers who might be experiencing difficulties, they seem unable to come through with the practical resources when it’s needed most.

Citizens Advice said that firms should have been better prepared for the anticipated demand as customers scrambled to submit meter readings.

Customers should not be tempted to submit inflated figures, as this is fraud, and is highly likely to be detected at some point in the future. Those with smart meters should not need to manually submit readings, although they may wish to keep a note anyway as some customers have said that their smart meters are not reliably connecting to their energy supplier.