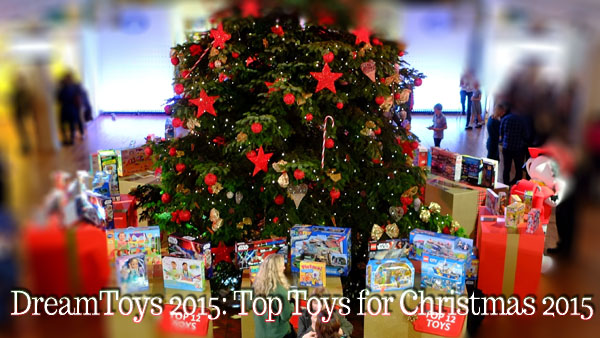 The Toy Retailers Association in the UK & Ireland has revealed what it believes to be this year’s top 12 toys for Christmas, as well as strong contenders across six other categories including Build It And They Will Thrive; Cute, Cuddly & Smart; Make It, Play It, Love It; Tots Get Busy; We’re All Heroes & Villains; and You’re Such A Game Player.

It’s fairly certain that many of the toys on this list will be very popular, and hence difficult to get hold of. Stock up on these toys early, or be prepared to face some unhappy children (who haven’t quite cottoned on to the true meaning of Christmas…)

Thankfully, the TRA dropped its ‘boy’ and ‘girl’ categories in 2013, so hopefully parents can simply choose whatever toys they think their kids will like without media pressure on what is considered male or female. Or perhaps they’ll just do that anyway…

The top 12 toys sees three entries with a Star Wars theme, plus plenty of construction and learning toys, and the obligatory appearance from a Frozen character. It’s great to see LEGO continuing to top the toy charts, even in an age of video games, tablets and Minecraft.

is certainly not a cheap piece of kit, but it does come with a huge array of items to keep kids (and adults) entertained.

As the product description explains: “A shipwreck with a cargo of gold bars has been spotted at the bottom of the ocean. Jump aboard the awesome exploration vessel and head to the scene! This LEGO City model is loaded with the latest high-tech diving equipment. Launch the remote sub and scuba scooter, and activate the winch system to lower the exploratory submarine into the water. Then climb into the shark cage and join the other divers deep below the oceans surface. Check out the amazing white shark, swordfish and octopus as you retrieve the gold bars from the sunken ship. But be carefulÉ the entire structure is unstable and might collapse at any moment! Includes 7 minifigures: 2 crew members, 4 scuba divers and a deep-sea diverIncludes 7 minifigures with assorted accessories: 2 crew members, 4 scuba divers and a deep-sea diver Features an exploration vessel, submarine with domed cockpit, remote sub, scuba scooter, shipwreck with collapse function, shark cage, seaweed, swordfish, octopus, white shark and 2 grey sharks Exploration vessel features a working winch, large wheelhouse, below-deck cabins and a lifeboat. Accessory elements include 2 mugs, walkie-talkie, binoculars, life preserver, welder, 2 boxes and 16 gold bars.”

Reviews appear to be positive, and as you know with LEGO it’s incredibly versatile. Other deep sea exploration items/kits are also available. Here we have Frozen Sing-a-Long with Elsa

“Frozen Sing A Long with Elsa makes her debut this Autumn Winter. Simply place the microphone up to her to activate the hit song “Let It Go”, which she sings in full. She also lets the child join in; just take the microphone away, sing the song and she carries on where you left off. The doll also says 15 different phrases from the film.”

This is likely to be another toy which annoys all adults within a 50-foot radius. Although the toy doesn’t have much of a repertoire, that’s not likely to deflate the enthusiasm for singing along with it. looks to be an interesting way to create three-dimensional figures by simply drawing with special “3D pens” and then using a UV pen to join and set it.

We’re a little concerned at an apparent disparity between the TRA, who has put this at number 3 in its overall list, and the reviews (admittedly only a handful) which suggest the product is expensive and not fit-for-purpose.

The product doesn’t appear to be unsafe in any way — the biggest concern is a parent’s worst nightmare… the boredom factor. The instructions suggest the UV pen works in just one minute, but several reviewers claim that even after ten minutes (a LONG time in a 6-year-old’s world) the ink/gel has not set properly.

We’ll reserve judgement on whether this is a good buy or not, except to say that it may be better to stick with products which have been around for longer. is an “interactive, singing, talking pet bird” who “talks, sings, dances and swings”.

This is the latest in a line of interactive “Character Options” mechanical battery-operated creatures which offer quite a bit of amusement (and irritation, in time).

This parakeet is supposed to respond to voice and sound stimuli, will flap and dance around, utter cute stock phrases as well as record snippets of the voice sounds around it, for later repetition in a bird-like voice (as one reviewer notes, be careful what you say around this bird!).

How much long-term appeal this will have remains to be seen, but if you can cope with a fairly noisy plastic creature mimicking the household (thankfully there is an “on/off” switch) then it may have earned its 4th place in the 2015 list. Paw Patrol, currently doing the rounds on CBeebies and proving to be quite popular, comes in toy form with the Paw Patrol Paw Patroller

The description states: “The Paw Patroller is the ultimate rescue vehicle and is perfect for making sure that the PAW Patrol team can get to new exotic adventure locations. Kids can drive their PAW Patrol vehicles in and head out together for a brand new adventure. The Paw Patroller comes with Ryder and his ATV vehicle and can hold 3 Paw Patrol vehicles inside or display 6 vehicles when open. Your patrolling will be just like the show when you hear the Paw Patroller’s authentic PAW Patrol sound effects. Inside you’ll discover a real working lift to take the pup vehicles up to Ryder’s Command Center! Together, your child’s imagination will be lit up with pup inspired rescue missions full of friendship, teamwork and bravery.”

As you can tell straight away from the description, it is just crying out for other Paw Patrol merchandise. This isn’t a cheap purchase in its own right, so if your child doesn’t already have other PP stuff, it might be worth holding off – otherwise you might be pestered endlessly for more merch well into the New Year.

It’s also worth checking out some of the reviews, as there are some annoyed parents who claim the build quality of the product is poor. Sadly, branded toys do tend to carry a price premium and you have to take this into account when considering purchases. by Hasbro claims to be “filled with fun and suspense, and somebody’s bound to get splatted! Just put some delicious whipped cream from home or the wet sponge on the “hand” of this hilarious game unit and start turning the handles. It could go off at any time, so keep your fingers crossed and hope you’re not the one who gets a splat in the face! You score a point for every time you turn the handle without getting pie-faced, and the one who scores 25 points wins.”

Messy games are all well and good but, yet again, there is questionable build quality in this. It’s also a concept that we think is likely to wear rather thin, rather quickly. Being splatted by cream or water is fun for a while, but not every day/week/month. I’d never heard of ‘Shopkins’ before, although apparently they are “super cute, fun, small characters that live in a big shopping world. Over 100 different Shopkins brought to life per series as the cutest collectible characters that can be found inside adorable shopping bags. Look out for the special finish Ultra Rare characters.”

is a play set with “movable and interactive features.”

The description continues: “There are lots ways to play and display with the Shopkins ‘Scoops’ Ice Cream Truck Playset. This playset features a treat board inside the truck and an Ice Cream display with an umbrella so that your Shopkins can sit and enjoy their tasty treat. Store your Shopkins in the freezer or sit them in the front of the Scoops Truck and take them for a ride as this playset has real moving wheels! Also included are 2 Exclusive Shopkins Characters, 2 Exclusive Cooler Bags and a Collector’s Guide to add to your Shopkins Collection. Once you SHOP, you can’t stop! Suitable for ages 5 and above. Contents: 1 Ice Cream ‘Treat Truck’ Playset, 2 Exclusive Characters, 2 Exclusive Cooler Bags and a Collector’s Guide.”

Reviews do seem to be pretty positive all round. If “Shopkins” is something you’re already into, or you can bear getting in to, then this might be a good Christmas purchase. is definitely worth considering, although it comes with a pretty hefty price tag.

The description says: “The definitive lightsaber of the Bladebuilders system provides kids with the unique components needed to create 100+ combinations from their imagination. The Jedi Master Lightsaber comes with a main Lightsaber featuring lights and sounds, two independently-lit lightdaggers, expansion hilt, two elbow connectors, dual connector, and cross connector. Combine with other Lightsabers in the BladeBuilders system (each sold separately) and imagine the thrill of battle with a custom Lightsaber!” Only a few reviews were available but they do appear to be favourable. The description says: “Star Wars figures and vehicles from Hasbro are designed to captivate with ingenious combinations of play. Figures often include accessories to vary and highlight the action. Vehicles feature compelling additions like projectile blasters and interesting design elements. This series showcases characters and interplanetary craft from the Star Wars saga in accurate re-creations from the latest installment, Star Wars: The Force Awakens. The saga continues with new adventures as this collection recalls powerful scenes of intergalactic clashes. Star Wars figure and vehicle collections are created for energetic, thrilling play.” Thunderbirds still makes an appearance in the popular toys list, and here we have the Thunderbirds Interactive Tracy Island Playset

From the description: “Based on the world famous base, it uses the latest in smart technology to recreate the launch sequences that you see in the show. Put on the International Rescue Communicator and take command of the Thunderbird fleet. Tracy Island is packed with over 40 action and rescue sounds so you really feel part of the team! Flick the switch and the palm trees will move back to make way for Thunderbird 2, Thunderbird 1 and 3 can also launch automatically and are accompanied with lights and rocket noises. The movable pool is included and you can even do some experiments in Brain’s Laboratory. The Tracy Island set is a dream-come-true for Thunderbird fans!”

Mixed reviews suggest its construction is not for the faint-hearted (and certainly not for little hands), and also that the build quality is variable. However, there are also some very positive reviews. is aimed at a younger audience.

The description states: “Your child will have fun playing with the moving lift and the doghouse and dog included with the VTech Toot-Toot Friends Busy Sounds Discovery Home, which also comes with Miss Nora, who is full of personality. Press Miss Nora’s light-up button to hear her introduce herself, share her hobbies and sing two sing-along songs. Miss Norah unlocks fun content at the seven MagicPoint locations throughout the house to encourage imagination whilst also teaching your child about cause and effect relationships through motion, lights and friendly phrases. The Busy Sounds Discovery Home features over 40 fun melodies, songs, sounds and phrases. MagicChat feature in the playroom allows Miss Norah and other MagicPoint characters to talk and sing to each other.”

There we have the top 12 for Christmas 2015. What do you think? Are any of these toys on your ‘must have’ Christmas list? Or are you doing your own thing?

Leave a comment below – we’d love to hear from you.

Now check out DreamToys 2015: Build It And They Will Thrive.