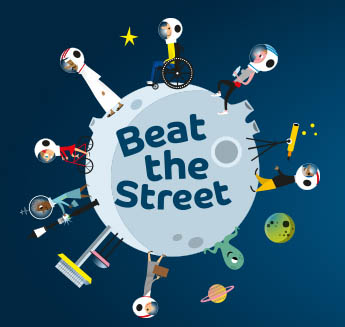 Beat the Street (BTS) has descended upon our county for another year.

It’s fair to say I was rather unimpressed with how things panned out last year, but the BTS team assure me all the bugs have been ironed out and they have learnt from previous mistakes, so we’ll see what happens.

This “live blog” is part of the Family Relationships Magazine because Beat the Street is an initiative which is aimed at getting families active, exercising together while having fun. Also, because last year it had an (albeit small) effect on my family – with my daughters being initially excited, then frustrated and upset by all the problems – I think it’s fair game for being “on topic”. 🙂

So from now, to Wednesday 17th May when BTS officially starts here, through to Wednesday 5th July when it ends, I’ll be blogging my experiences, plus sharing the views of others both in our town and elsewhere.

One Beat The Street pack came home from my youngest daughter’s school on Tuesday. Have already seen people tapping away at the box outside the school even though the whole thing doesn’t start until next Wednesday.

The card registration page has turned into rather a nightmare of questions about health and lifestyle. Fortunately only the basics are mandatory (although that does include full address and date of birth, plus “prefer not to say” options on questions such as “Do you have a long-term medical condition?”

There are also a number of questions designed to probe how well you think your neighbourhood gets on together.

I imagine these are all asked so the charities and organisations involved can create all sorts of pretty graphs and draw conclusions about the state of our health and communities. However, as it’s all tied to personal data, I have chosen not to answer. (Privacy policy or not, don’t forget how many organisations have been hacked recently.)

So I have a registration at least, even if “Intelligent Health” has been denied data on my most personal thoughts and opinions.

Beat the Street starts tomorrow but my eldest daughter’s junior school (which was on the list as participating) has not sent out the packs containing the electronic fob yet.

I’m not sure whether it’s the school being disorganised, the BTS team not sending them out, or the assumption that they’re taking part this year when they’re not.

Not a great start as if they don’t come out today there’s no chance of starting on Wednesday morning.

Added to which, the web site still feels half-baked. When logging in, it’s impossible to edit any of your personal information, change the password, or change the team you’ve assigned a card to. The buttons are there but they don’t work.

Given this isn’t the first year and the scheme has been run in a number of towns now, I would’ve thought this would be a slick and smooth experience by now.

Additionally, there are reports on the BTS Facebook group that at least a couple of the boxes have been vandalised already.

We tried to start this today. There wasn’t time this morning but our youngest did want to do it after school, despite the second beat box being a detour from our home route.

We tapped on the beat box outside the infant school and it worked. We then walked up to the BB nearer to our house and saw it had a big hole in one of the light fittings. Unsurprisingly, it didn’t work. It had been vandalised, after less than a day in operation.

Thinking back to last year, this box very often didn’t work, and took ages to repair each time (much longer than the target 24 hours). So our family has now agreed that we won’t be doing Beat the Street. It just isn’t worth the hassle.

You might wonder that we’ve given up after just one box failing to work, but the decision is based on how feeble the ‘game’ worked last year, with points not being added, boxes not working, constant bad communication from the BTS administration, and so on. Added to which, we are already a pretty active family but we don’t want to be diverted out of our way just ot arrive at beat boxes which don’t even work. It becomes demoralising.

I have a Fitbit, which is a far more motivating way to get into exercise without having to stick to predetermined routes or rely on technology working. I’m not suggesting you can give everyone in a town a Fitbit, but there have to be better ways of doing this.

Not only this, but the leaderboards have not been properly implemented on the site yet. You’d think everything would be in place for launch day, but in fact this morning the page wasn’t available, and this afternoon – now that it is – it’s showing a mishmash of scores from 2016 as well as zeroes for everyone else. Not very professional at all.

This kind of puts an end to our personal involvement in this live blog! However, I’ll keep an eye on the Facebook group to see how things are going. Personally, I’m not holding out much hope.

Update: From the initial Facebook comments it looks as if many of the boxes in our particular area have been vandalised already. It’s a sad reflection on the society we’re in but also shows that this scheme needs to be toughened up some how, if it’s going to work better.

Update 2: Someone on the Facebook group publicly admitted to cheating, basically saying the scheme was great “if you had a car to drive between boxes”. Surely the end is near when people are brazen enough to admit they’ve cheated!